A Little Bit About Natesh 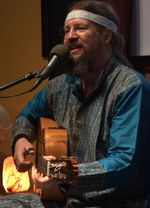 Natesh first experienced kirtan in late 1979 in the Oakland Siddha Yoga ashram of Swami Muktananda (Baba), although they simply called it 'chanting' in those days.  He developed a deep connection to Baba and to the path, including the powerful spiritual practice of chanting mantra and the Divine Name.  For many years he played guitar at the evening chants and saptahs at the Oakland ashram.

Although he composed a couple Om Namah Shivaya chants in those early years, it wasn't until early 2004 that he started 'downloading' chants from Source on a regular basis.  A few months later, he formed a group he simply called the Kirtan Wallahs with his wife Monnie and several other interested Sedona area residents and began hosting weekly kirtan in Sedona in June of 2004.  Natesh and the Kirtan Wallahs have held about 700 public kirtan gatherings in Sedona and have led kirtan for numerous other private and public events in addition to the festival appearances at Bhakti Fest for several years, and Shakti Fest and a number other festivals and conferences. He welcomes more opportunities to lead kirtan at more festivals and community events.  His kirtan expanded into international territory in 2016 as he led kirtan in India - in New Delhi, Vrindavan, Rishiskesh, and Nimboli (near Ganeshpuri) - and Belgrade, Serbia.  He has also offered background chanting / mantra music for the well respected yoga teachers, Mark Whitwell and Saul David Raye, during their classes at festivals.

Natesh has composed well over 200 chants since 2004, of which there are over 180 that he still chants and are in the Bliss of Kirtan Music Book.  (The music book in PDF form for 150+ chants is available for free download at this link.)  His chants have been called “some of the most beautiful kirtan melodies I’ve heard.”

In early 2014, Natesh released his first studio album, Bliss of Kirtan, produced by Ben Leinbach, who is well known for producing Jai Uttal's albums for many years.  The album features many gifted musicians and singers, many who are quite familiar to kirtan lovers in the West.  It has been called "stunningly beautiful for the ear and for the soul" and "a quantam gateway to a state one normally only reaches through deep meditation."

In early 2016, on his first trip to India, Natesh met Mohanji and quickly became an ardent devotee.  He has written numerous chants for Mohanji and in 2020 released a 2nd album comprised of chants and songs dedicated to and inspired by Mohanji.

The Ganesha "kirtan band" above was acquired and placed in my home in early 2004.  I spontaneously began composing a lot of chants a couple weeks later. Coincidence?