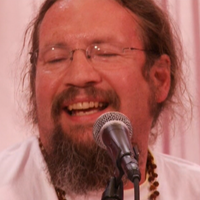 Kirtan is a form of devotional chanting from the ancient traditions of India. This powerful, transformational spiritual practice is a central component of bhakti yoga, the yoga of devotion. Bhakti yoga is considered the easiest path to moksha, or liberation, in this age. Kirtan opens the heart, purifies the entire being and the surrounding atmosphere and stills the mind for meditation.

As a traditional practice, it is regularly done in the ashrams and centers of most of the great spiritual teachers of India, many of whom have thousands of followers in the U.S. and elsewhere outside India. These teachers emphasize the importance of kirtan as a regular practice.

Kirtan typically involves call-and-response, repetitive chanting of simple mantras and names of the Divine Beings of the Vaishnav, Shaivite and Shakti traditions. Typically, the melodies are quite simple, harmonies are avoided and often the tempo of a chant increases over time. (It is becoming quite common to hear harmonies in the Westernized version of kirtan, however).

There are other forms of chanting from these traditions, including the chanting of sacred texts (archana) and bhajans. The latter differ from kirtan in that they are typically comprised of verses of devotional lyrics that are more descriptive in nature. Bhajans are also often sung without the traditional call-and-response form found in kirtan and the melodies can be more complex as well. Because of the multiple verses of less familiar words and sometimes also more difficult melodies, bhajans are not as easy to learn and chant with a group as kirtan.

All of the spiritual teachers with which Natesh has been deeply connected through the last several decades have made numerous statements about the benefits of chanting. Natesh's present spiritual teacher, Mohanji, states:

"When we cannot meditate, chanting helps. Even when we can meditate, chanting can lead to deeper meditation. The name of Lord, the sound, the breath, the vibration, everything helps silence of the mind. Chant the name, contemplate on the name of your chosen God or Guru and merge with that constitution, which would be the state of oneness."

"Chanting opens the heart and makes love flow within us. It releases such intoxicating inner bliss that simply through the nectar it generates, we can enter the abode of the Self."

The past couple decades has seen a huge upsurge in the popularity and availability of kirtan in the West, being fueled in part by people that became exposed to it in the context of traditional spiritual practices with their spiritual teachers, or gurus, but that have taken it beyond the traditional ashram environment. Krishna Das, Jai Uttal, Vaiyasaki Das and Dave Stringer are excellent examples of such Western devotees that have helped to popularize kirtan through their recordings and touring, bringing kirtan to people that might not otherwise be exposed to it or have a chance to chant with others in their community. Other Westerners have incorporated the energy and essence of kirtan and devotional chanting into their music, but often include English lyrics or chants from other traditions. A few examples are Deva Premal and Miten, David Newman, Girish, Sean Johnson and the Wild Lotus Band and Shantala.

The opportunities to participate actively with kirtan are multiplying as more people and groups begin offering regular opportunities to chant in their local communities, as Natesh has done in Sedona since 2004.